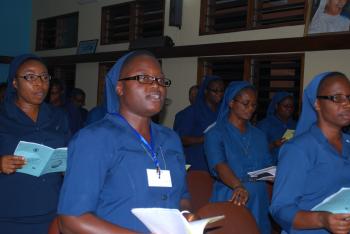 The company of the Daughters of Charity of St. Vincent de Paul, present in 94 countries with approximately 16,000 Sisters, is at the service of Christ in the poorest of the poor on every continent.

From May 5 to June 12, 2015, the Daughters of Charity will hold their General Assembly at their motherhouse in Paris, 140 rue du Bac.As usual, this Assembly will evaluate and promote fidelity to the apostolic vitality of the entire Company.

A week-long retreat will introduce five weeks of reflection on the theme: "The Boldness of Charity for a New Missionary Momentum". The members of the Assembly will together seek how to best respond, in fidelity to the Church and to their charism, to the calls of those who suffer from the scandal of poverty and modern slaveries:refugees, marginalized persons , victims of human trafficking etc.

The election of the Superior General and her council  will take place during this Assembly. They are responsible for the spiritual animation of the Company of the Daughters of Charity and the coordination of missionary endeavours among the different Provinces.

This international event is also an opportunity to go more deeply into the message of the Founders, St, Vincent de Paul and St. Louise de Marillac, in order to boldly live the present, determine guidelines for responding to the missionary and spiritual challenges of today, and joyfully enter into the future.