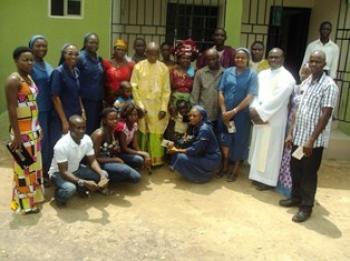 CALL FOR PARTNERSHIP IN THE FIGHT AGAINST THE MENANCE OF TERMINALLY ILL PERSONS ON OUR ROADS.

Disturbed by the increasing incidence of terminally ill persons on our roads, and fired by the Assembly call to boldness of charity, the Daughters of Charity, on 19th May 2016, initiated a process of dialogue among key stakeholders in Rivers State, towards the eradication of the menace of terminally ill persons, who are daily paraded along major roads in Port Harcourt and major cities in Nigeria. This was done in a seminar organized in collaboration with the National Orientation Agency (NOA) and the Catholic Diocese of Port Harcourt.

Participants at the session were drawn from various government  ministries and parastatals such as   the Ministry of Justice, Ministry of  Women Affairs, Ministry of Social Welfare and Rehabilitation, Ministry of Environment, Ministry of Health, Media Houses, State Security Service, Council of Islamic affairs, National  Population Commission, traditional rulers, UNICEF  and a host of  others as well as  non-governmental bodies.

In a key note address presented at the occasion by Most Rev. C.A  Etokudoh, the Catholic Bishop of Port Harcourt, the  prelate noted that the theme of the stakeholders meeting strikes the conscience of society today  as human beings are created in the image and likeness of God. He noted that society's conscience has become blurred to the plight of vulnerable persons. He observed the increasing trend of having terminally ill persons on our roads, some of whom have not only been dehumanized but have had their weaknesses exploited by some unscrupulous and criminally minded persons who make monies from their plight .

He decried the trend where laws that are enacted for the protection of the weak are not implemented. He said the non-availability of such laws, and the non-implementation gives the country a bad publicity. The Bishop called for proactive steps to tackle the situation. He criticized some NGOs for taking advantage of the terminally ill persons and called on Ministries, Agencies and Governments to establish and enforce  laws that truly protect them. He called on  government  to collaborate  with established Church groups such as the Daughters of Charity of St. Vincent De Paul and the Immaculate Heart Sisters of Port Harcourt Diocese that are specialized and experienced in caregiving of this kind.

He challenged  the stakeholders to focus on comprehensive ways to eradicate our street of the vulnerable, first by identifying those who profit from this and prosecute them; secondly to re-examine the laws established to protect the weak in the society; thirdly examine the role of each stakeholder and work in synergy to build a partnership.

In a paper presented by the guest speaker, Sir. C.I. Enweluzo, he articulated  clearly that the necessity for the stakeholder’s gathering was to recruit them as part of the effort in the eradication of terminally ill persons on our roads and in doing so, stop their exploitation. He explained that the basis for stakeholders' involvement should be the interest to see a better Rivers State, a better Nigeria, the betterment of the welfare of our fellow human beings and love and respect for human dignity.  He highlighted the statutory functions and roles expected of each of the key stakeholders in the fight to clear our streets of terminally ill persons and  recommended that terminally ill persons and  old people are given palliative care to ease their pains and suffering.

The participants were thereafter divided into eight groups to answer some structured questions. They did and reported back to the stakeholders in plenary.  A key outcome of the stakeholders' meeting was the setting up of a Strategic  Committee to follow-up on the   discussions of the meeting.