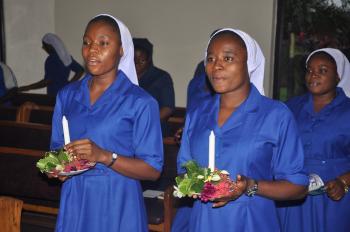 INCORPORATION INTO THE LITTLE COMPANY

We are grateful to God for adding more labourers into the Little Company. Today four young women who felt called to share in the charism of St. Vincent and St. Louise were incorporated into the group. The Daughters of Charity have continued to grow. They are officially members of the Company of the Daughters of Charity as they begin intensively their initial formation in the Seminary, a long period of 24 months. The ultimate goal of formation is to show the beauty of the life of faith and to help cultivate it in giving this solid basis. It is in following Jesus that youth displays all the richness of its potentiality and acquires its full meaning.

It is in following Jesus that the young discover the sense of a life lived as a gift of self, and experience the beauty and truth of growing in love.

It is in following Jesus that they feel themselves called to communion with him as living members of a single body, which is the Church. (Message of His Holiness Pope John Paul II For The XXXII World Day of Prayer for Vocations, 1995)

May the Lord of the harvest who has called them to share in his life, sustain and preserve them. Amen