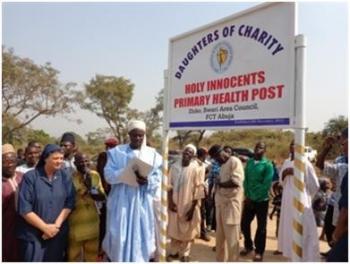 THE DAUGHTERS OF CHARITY OPENS A PRIMARY HEALTH POST AT ZHIK.

The Daughters of Charity of St Vincent de Paul, Province of Nigeria, recently launched a Primary Health Post in Zhiko community. Zhiko is a village in Bwari Area Council of the Federal Capital Territory of Nigeria. It is about 20kilometers away from  Abuja metropolis. It is inhabited by the Gbaghi people whose main occupations are farming (for men) and selling of firewood (for women) got from deforestation of their virgin land.

In order to make ends meet, the people have to trek over 15 kilometers to Byazhin across, or even further still to far-away markets to sell their products. It is especially pitiable to see young and old women as they carry heavy loads of firewood on their shoulders on the match to sell them.

The people of Zhiko are among the many groups living at the margins of the society who are often never remembered in government development plans. They have no good roads, electricity, good water supply and health facility. But for one Primary School, there are no schools in the area. There are about 3 to 4 streams along the road to the village. Apart from one poorly erected bridge constructed by the people themselves, the rest of the streams have nothing to aid any one crossing them. During the rainy season, the streams usually overflow their bank, making it impossible for movement in or out of the village.

The Sisters of St. Vincent’s community, Abuja discovered Zhiko village during one of their weekly Home Visitations.  They have, since their first encounter with the village entered into the life of the people, sharing their challenges and discerning with them possible ways of surmounting them as a people. One of the major needs identified was that of a health facility, that will cater for the health needs of the people since there was none in the village. An attempt to respond to this need prompted the erection of the Primary Health Post. The building consists of a consulting room, dispensary room, treatment room and a multi-purpose hall.

Apart from the many health benefits which this project will bring to the people, it is anticipated that it will bring government attention to the host community and attract more potential partners and volunteers for further socio-economic development.

To God be all glory for making it possible for this little seed to be planted in Zhiko. We pray that He will bless this little step and make it a stepping stone for greater development in Zhiko land.