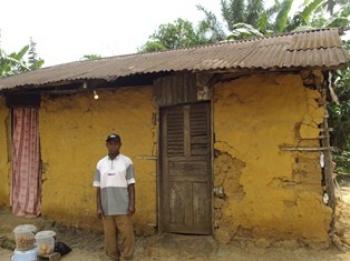 Kolobi is a middle aged man who hails from Oginibu in Delta State and is the second of thirteen surviving children of his parents. He contracted leprosy as a young man and came to Ossiomo in 1984 for treatment. He settled here afterward and got married to two wives who have six children (three children each). Though Kolobi’s family had longed to go back home and his brothers had given him their father’s old mud house as his own inheritance, the house was in very bad shape and practically uninhabitable. Kolobi had no means of building a house as he is a local carpenter and a subsistence farmer while both wives one of who is an amputee (secondary to leprosy) engage in petty trading. Their incomes are barely enough to take care of the daily needs of the family, including their children’s education.

Following needs analysis conducted in Ossiomo in 2011, and the desire expressed by some of the residents of Ossiomo to return to their places of origin, Mr. Kolobi was one of the first two persons chosen for the housing project in view of their re-integration into their communities of origin. After the family was selected for this project, visits were made to the site and a bill of quantity was prepared. His elder brother, acting on behalf of the family gave a written consent for the old house to be demolished and a building erected on the site for Kolobi.